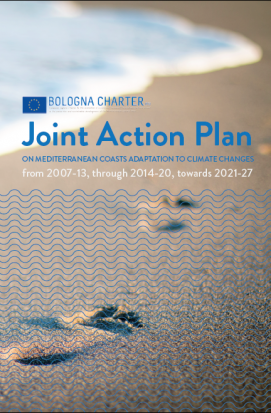 The updated Action Plan of the Bologna Charter initiative

After the overall draft of the updated version completed in June 2019, the further confrontation and contributions coming in this last period of consultation, we have the pleasure to announce the issue the new BC Joint Action Plan. It looks towards the forthcoming challenges and to the next ERDF programming period:

A printed copy will be distributed during the 23rd edition of ECOMONDO Expo, next 5-8 November 2019 in Rimini, in occasion of the beacon Conference on “Sustainable management of sediments for the Blue Growth in coastal areas and small and medium ports” 5th November, and during all the Expo by the stand of the Emilia-Romagna Region.

The Co-Evolve spin-off is officially started

With the Co-Evolve4BG project, officially started the 1st of September 2019, the promotion of an eco-sustainable development of coastal areas extends to the southern and eastern Mediterranean coasts.

While the Co-Evolve project is going to complete, at the end of October, the new project is started to keep analyzing and promoting the co-evolution of human activities and natural systems broadening its range of action to the coastal touristic areas of the Southern and Eastern Mediterranean.

Co-Evolve4BG project, with Tunisia INSTM as Lead partner, involves Italy, Spain Tunisia, Greece and Lebanon, through 9 partners (regional and local public administrations, universities, research institutes and foundations), and has been officially presented, with a launching conference held on 18-20 September in Gammarth, Tunisia.

Co-Evolve4BG and Co-Evolve are part of the wider UfM labelled project initiative “Med Coast for Blue Growth” (MC4BG) and together contribute to the implementation of the Bologna Charter Initiative and of the Strategic Theme 2 of its Joint Action Plan.

The Bologna Charter experience will be reported within the regional seminar organised by the UfM Secretariat in Brussels the next 19/11/2019, by the CPMR interventon in the Session on ongoing regional actions and projects.

The invitation was focused on the objective to bring the experience of the Bologna Charter cooperation between Regions on the themes of coastal protection and sustainable development of coastal areas, to suggest possibly the replication of similar experience within the CPMR Island Commission community, and in particular on sustainable tourism.

It also represented an input to the seminar “Programming and implementation of structural funds in EU islands”, foreseen in the meeting, as example on how to jointly capitalise on best practises, share information on main challenges concerning specific themes, looking to the opportunities in the developing phase of 2021 -2027 ESIF Operational programmes on areas which are of priority interest for EU Islands.

The BC initiative was invited by the GIP Littoral Aquitain (Group of Public Interest) in the French Atlantic region, to bring its contribution in coastal protection strategy and best practices for littoral management and protection by erosion and climate change effects, developed also with the contribution of the It National Board of Coastal Erosion.

With the presence of the President of the Region Nouvelle-Aquitanie M. Alain Rousset, and of the President of GIP Littoral M. Renaud Lagrave, the event has been the occasion to exchange about common issues on coastal erosion, Atlantic and Mediterranean sides, necessity to deepen knowledge and analysis capability on the phenomena, and exploit the interregional cooperation and financing opportunities given by the EU structural funds.

Change We Care project under implementation

Change We Care, Interreg V A Italy-Croatia funded project in the Priority Axis 2 – Safety and Resilience, is running in its first year of implementation. There are under development the analysis of actual conditions and future scenarios in coastal and transition areas (Po River Delta, Banco di Mula di Muggia, Vran Lake, Kastela Bay and Jadro River, Neretva River Delta) and it is more recently started the stakeholder mapping/analysis and design of participatory processes.

Led by ISMAR-CNR, with 10 partners of Italy and Croatia, the main goal of the project is to deliver integrated, ecosystem-based and shared planning options for increasing of adaptation capacity (resilience) of the areas and the local communities. It represents also a important contribution to the implementation of principles and action lines of the Bologna Charter Initiative and its Joint Action Plan and to the aims of the Italian National Board on Coastal Erosion.